Trips N Tours Limited is a member of the Association of Travel Agents of Bangladesh (ATAB).

Association of Travel Agents of Bangladesh (ATAB) is a Government registered Association of travel agents of Bangladesh. Immediate after the liberation of the country the owners of the activated Travel Agencies in the country from Pakistan period felt necessity to be united under one umbrella to protect their business interests as well to secure the healthy growth of travel and tourism industry of the newly born Bangladesh.

The first Annual General Meeting (AGM) of this unregistered Association was held in Bangkok on 10th April, 1978 while the second AGM were held on 29th June, 1979 at Dhaka Club. The historic amendment of the constitution of the Association was adopted in the second AGM and at the same AGM ITAA was re-named as “Association of Travel Agents of Bangladesh”, in short, “ATAB”. Under section 3(2)C of Trade organization Ordinance, 1961 & section 26 of the Companies Act, 1943, ATAB has got registration from the Government of Bangladesh on 18 December, 1979. ATAB’s Executive Committee formed after every 02 years through election as Constitution of ATAB.

New and modern central office of ATAB was established on 17 June, 2007 at Sattara Center, Naya Paltan, Dhaka. ATAB expanded its office at Sylhet in 2006 and at Chittagong in 2007 as zonal office on owned space.

ATAB established ATAB Tourism Training Institute (ATTI) in 2007 to provide skill working hands for the travel and tourism industries. In the meantime near about 2500 trainees have certified by ATTI who are already employed at different organizations and thus ATAB is playing a vital role to create productive employment in the country.

Today ATAB is one of the most well-organized and well known associations of the country with 3500 members. All government and non-government organs duly evaluate ATAB and use to call its officials to solve different issues related with air travelling, Hajj-Umrah etc. Airlines, operative in Bangladesh, are also giving due importance to ATAB members effective for fruitful suggestion in aviation business. By this time ATAB has become a strong stakeholder in the aviation & tourism sector in Bangladesh. Specially, during the presidency of Mr. S. N. Manzur Murshed (Mahbub) ATAB has climbed at the peak of name and fame and thus materialized the dreams of its founder members in reality. Trips N Tours Limited is a member of the Tour Operators Association of Bangladesh (TOAB).

Tour Operators Association of Bangladesh (TOAB), was formed in the year of 1992. This was the time when a handful of agencies operating tours inside Bangladesh, felt the need of such an association or trade body to overcome immense problems and difficulties being faced by them regularly. Besides this, the other main objective or aim of the organization was to develop and nourish tourism in Bangladesh and to promote tourism products of Bangladesh in the international arena.

After long wait and completion of different formalities, the association was recognized as a trade organization by the Ministry of Commerce, Government of the People’s Republic of Bangladesh in 2002.

In tourism, all over the world tourist’s expectations are very high for a hazardless traveling, secured food & lodging, efficient spot-visits, economically cost-effective transaction in every step whether it is a business or a personal recreational tour. To fulfill these demands of an individual or group of tourists the tour operators come into picture and provide all the services they need. They are like one-stop service provider starting from their arrival to departure in case of the overseas tourists and from your house back to your house in case of local tourist either it is inside the country or to a foreign land. In Bangladesh where the infrastructure of this industry is not well developed it is always recommended that a tourist should arrange his travel here through a member of TOAB, which will be more safe and authentic.

It is a fact that due to different limitations prevailing in the field, TOAB failed to perform to its full capacity in the past years. However, they still hold meeting to exchange views with the Aviation and Tourism Journalist Forum, observed World Tourism day and organized seminar in collaboration with Bangladesh Parjatan Corporation. It also organized seminar in association with Federation of Bangladesh Chamber of Commerce and Industries (FBCCI). It is expected that, with the change in the whole atmosphere in Bangladesh including the executive body of TOAB, they will do much more in the coming years. TOAB is the Premium Partner of Dhaka Travel Mart since its inception.

Since the beginning of TOAB, its members have been actively participating in different international trade fairs like ITB – Berlin, WTM – London, BITE – Beijing, ATA Travel Mart -Bangkok, TTF – Kolkata, SATTE – Delhi etc. in collaboration with the Ministry and BPC from to time. Founded in 1951, the Pacific Asia Travel Association (PATA) is a not-for profit association that is internationally acclaimed for acting as a catalyst for the responsible development of travel and tourism to, from and within the Asia Pacific region. The Association provides aligned advocacy, insightful research and innovative events to its member organisations, comprising 95 government, state and city tourism bodies, 25 international airlines and airports, 108 hospitality organisations, 72 educational institutions, and hundreds of travel industry companies in Asia Pacific and beyond. Thousands of travel professionals belong to the 36 local PATA chapters worldwide. The chapters organise travel industry training and business development events. Their grassroots activism underpins PATA’s membership in Uniting Travel, a coalition of the world’s major Travel & Tourism organisations dedicated to ensuring that the sector speaks with one voice and acts in unison on the major issues and includes  ACI, CLIA, IATA, ICAO, WEF, UNWTO and the WTTC.

Trips N Tours Limited is a member of the Dhaka Chamber of Commerce & Industry (DCCI). 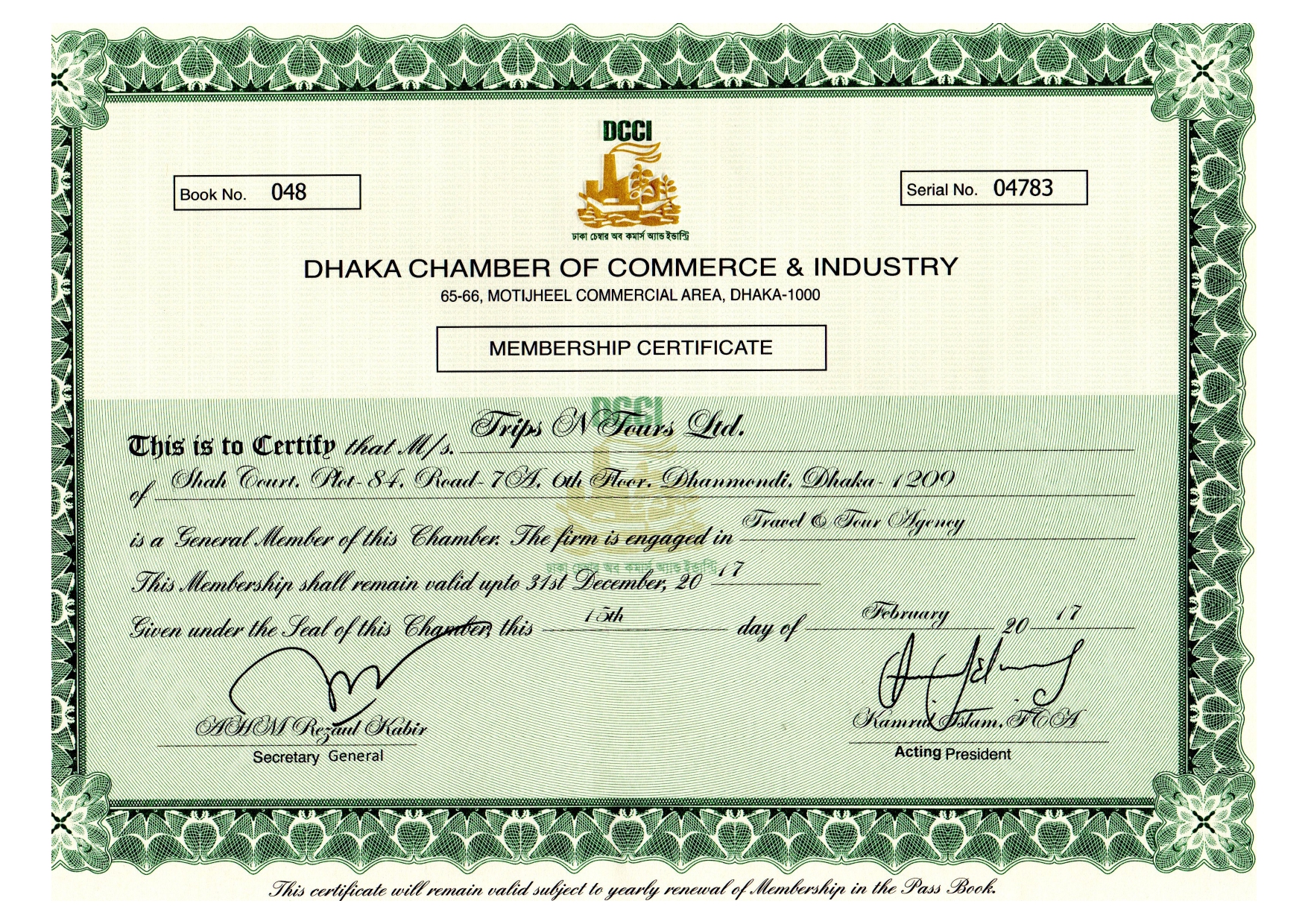 Trips N Tours Limited is a member of the International Organization for Standardization (ISO). Your trustworthy partner
for travel needs